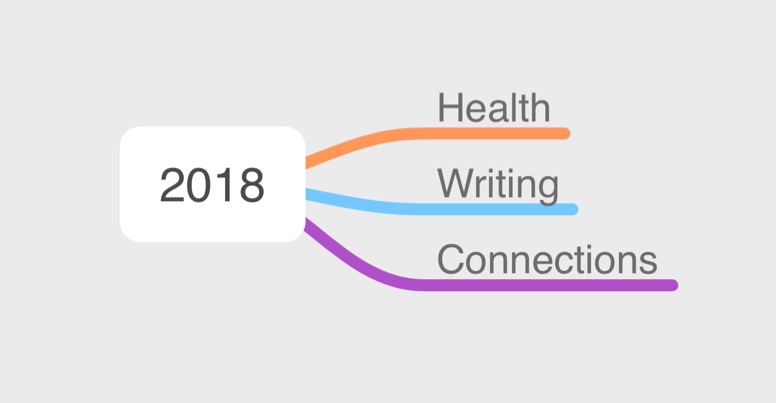 Continuing the tradition I started back in 2010 (see past years), here are three words that describe themes I intend to focus on this year. They aren't "resolutions" as much as areas of activity. "Themes" is a good way to think about them.

Carrying this one over from last year... because sadly not a great amount has changed over the past 12 months. I have let my weight creep up to where I am about 30 pounds over where I should be (and where I was back in 2011). I haven't been exercising. I have some dental issues to take care of. I want to be around with my wife and daughters for a long time... and we each only have one body. I need to focus on this in 2018.

You'll notice that the last time I wrote on this DanYork.com blog was ... one year ago! I have not written on Disruptive Telephony since March 2017 - and that was the ONLY post in all of 2017 on what used to be my primary blog. Only 4 posts on Disruptive Conversations, 0 posts on Code.danyork.com, 1 on Monadnock Curling Club, and so on....   I posted 9 times on CircleID , but they were all short pieces about events, activities, deadlines, etc. And I only published 28 posts on the Internet Society's blog during the whole year.

The reality is that 2017 was a challenging year for my writing in that I spent an insane amount of time focused on the launch of the Internet Society's redesigned website in September (which involved work through the end of the year, of course). Everything else got pushed aside - including all of my own writing.

In 2018 I hope to change that. There are a great number of stories inside me just trying to explode out. There are some reflective "thought pieces" about the current state of the Internet that I so dearly want to write. There's a book I'd like to update. I have several new book ideas I'd like to move forward on.

For me, I write because if I don't write... the stories build up inside of me until they want to explode like a pressure cooker without a relief valve. Writing is my relief valve. I need to do it.

My work responsibilities will still be significant around our web sites, but I'm hoping that somewhere in the midst of all the madness I can make the time to get my voice out there.

Like perhaps many people, I'm finding that I'm communicating with a large number of people, but not necessarily connecting with people. I don't mean that in the LinkedIn "I have XXXX connections" form, but more in the deeper relationships and knowledge about other people.  I want to deepen some of the connections I have this year, both with people online and also people locally and "offline". Some of that is actually meeting with more people face-to-face. Some of that is just carving out the time to have deeper and more meaningful conversations. In the end, the connections we have between us - and the community we have around us - are what is so vitally important to us all.

That's what I am thinking about for this year... what about you?

Ha! I have dentist on my list too. There's been so many doctor's appointments for my wife and kids that I've let mine slide. In spite of everything 2017 went pretty well, I'm hoping I can continue along the same path.