« The Christmas Story, As Told by ChatGPT in Iambic Pentameter | Main | My Themes for 2023 » 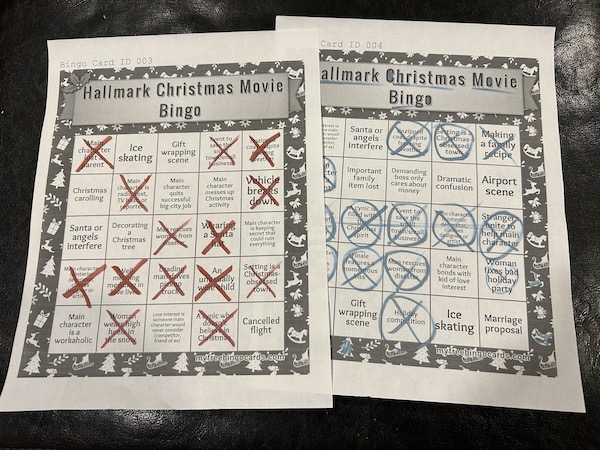 This past holiday weekend our older daughter brought a new fun activity - “Hallmark Christmas Movie Bingo”. If you are familiar with the “Hallmark Channel” here in the USA, they produce many seasonal romance movies. They vary widely in quality and some are a bit cheesy and cringe-worthy. Many of the movies follow a common formula … something like… high-powered marketing exec in New York City finds out her fiancé is cheating on her, and so goes away to spend Christmas with one of her old friends at her house in some rural location (often Vermont). While there, something happens (car breaks down, big town event is in chaos), and she meets some hunky man who she is initially repelled by… but by the end of the movie they are either kissing, getting married, or she is leaving her job in New York to relocate to this ideal life in the rural town. Or something like that. Usually the main character seems to be female, although I’ve seen a few male. Often they are cynical and think Christmas is just a consumer spending experience.

Anyway, this formulaic production model turns out to be perfect for a bingo card. Here are just some of the squares on one of the free sites that offer these cards:

You get the idea.

It was a fun addition to watching the movies - and quite honestly kept me watching one very cringe-y and unrealistic movie when I might have just left the room to do something else. Hallmark staff clearly understand this, as they have written about it, and even sell a bingo kit. There are, of course, many free sites offering such cards.

What fascinated me, though, was to learn a bit more about the Hallmark Channel itself. A Wikipedia article traces its history from its origins in the late 1980s and early 1990s with two religious cable channels. These combined to become first the “Faith and Values Channel” in 1993 and then the Odyssey Network in 1996. In 1998, Hallmark Entertainment and The Jim Henson Company (think of the Muppets) became investors and the channel further reduced its religious programming to focus more on “family” shows.

In 2000, the ownership structure changed and in 2001 it was rebranded as the “Hallmark Channel”. The Wikipedia article goes on to detail the evolution of the channel, including the involvement of both Hillary Clinton and Martha Stewart at different times - things I was not aware of - as wall as the development of the seasonal content that many of us may be aware of today. I also was not aware of all the animal programming, although that makes sense in the context of their historic “family friendly” programming.

The article also notes some of the Hallmark Channel’s struggles between its more conservative origins and the more inclusive society we are in today. And noting the evolution of the channel to include LGBTQ characters or stories.

I seldom watch the Hallmark Channel myself, and I don’t know that this weekend’s experience will change that, but it was an enjoyable way to spend some time together - and it was interesting to learn of this larger history.