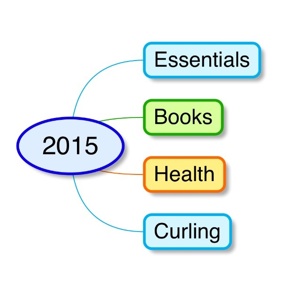 As I have done for the past several years now, I like to start off on January 1 with a post about a few "words" that represent aspirations I have for the year. As I did last year for 2014, I'm going to write about four words for 2015, as compared to the three words I wrote about in 2013, 2012, 2011 and 2010. And while I've been doing this for my own reasons, I should credit Chris Brogan for starting the idea of writing in this way publicly many years ago. So here is my current thinking for 2015...

Over the past six months or so I've been giving a great amount of thought to what exactly I want to be doing - in many different aspects of my life. Part of that came about as part of looking at my role within the Internet Society and thinking about what makes the most sense for my particular skills and interests. But perhaps a larger part came about in some of the reading and discussions my wife and I have been having around what many call "minimalism" or variations on that theme. Basically... looking at how to do fewer things better. We only have so many hours in the day and we choose how we are going to spend those hours... and we choose what we give our attention to. My wife's ongoing experience with cancer treatments has certainly changed our overall perspective and made us think about what is most important to us.

This year I want to continue that effort into distilling things down to what are really the "essentials" in my life upon which I wish to focus. This may mean focusing more and putting aside some side projects... or admitting that some project ideas may just never happen - and that's okay.

To go back to that wonderful quote from the poet Mary Oliver:

Tell me, what is it you plan to do with your one wild and precious life?

Given that my last book was published four years ago back in 2011, I do feel a bit of a desire to have another book come out some time soon. An obvious candidate is to pitch O'Reilly on doing a Second Edition of Migrating Applications to IPv6 given that a lot has changed in four years and that there is much more that can be said about IPv6 based on the deployment experience to date. I also have several ideas for books in the telephony/telecom/VoIP space.

I also have several ideas for books outside the pure technology space... more in the public relations / marketing / social media space. And there are some other ideas I have floating around my head...

Ideas for books are easy... it's making the time to create the book that is the challenge! I'd like to see what I can do in 2015 to at least get some book project underway.

"Health" was actually one of my three words back in 2010 and as I noted in my 2011 post I went far in 2010 dropping 45 pounds and starting to get into running. Last year "running" was one of my words and I'm now pretty confident that running is part of my lifestyle and just part of what I do.

But... now this year I need to focus a bit broader than just running. It's been a while since I've had a physical and there are some other health issues I'd like to address. It's time to do a bit more to ensure I'm around for the long term.

This is not so much an aspiration as an admission that this year may more heavily involve the sport of curling that I enjoy so much. There are two aspects here. First, my soon-to-be-13-year-old daughter enjoys curling and shows some interest in doing more competitively. IF she does that (and it's still an "if"), that will set us on a potential path of bonspiels (tournaments) and camps that may set the tone for much of our family activity for the year. We'll see. Second, I very much want to see this be the year when we start making some headway with starting up the Monadnock Curling Club and looking at bringing the sport of curling to our region of New Hampshire.

That's what I'm thinking about right now for this year... I have a sense that 2015 could be a big year on a number of different fronts... we'll have to see how it turns out.