« Heading To A "Junior Curling Camp" This Weekend | Main | Of Leaf Bags, Yankee Frugality And Our Disposable Society » 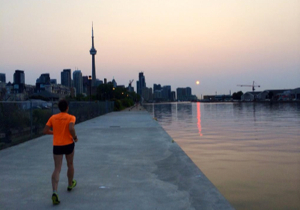 A true story - I wrote this email at about 5:00am at a recent conference where I had told someone that I would meet for a run at 6:00am:

Unfortunately I completely forgot about the <meeting> from 8-9am ... and since I also have to pack up to check out of the hotel as I'm flying home tonight, as well as get out some messages/posts *before* the meeting... there's just no way I can also fit in a run. :-(

If you get this before going out and could just fire back a quick acknowledgement that would be great. If I don't hear from you I'll be standing down in the lobby at 6am NOT in my running clothes.

I was about to hit the Send button.

My cursor was poised over the send icon button at the top of the message window on my MacBook Pro. All I had to do was tap my finger and the message would be off.

... and as I read that message and re-read it again and again... it just seemed like a really weak excuse.

There will always be reasons to NOT go for a run.

As I thought about it, I realized that if I were truly honest with myself some of those posts and messages that seemed so urgent to send off before the 8:00am meeting... really could wait a bit. Sure, it would be great to get them off first thing... but it wouldn't be the end of the world if they were published/sent a few hours later.

And I realized again that it is easy to NOT prioritize exercise and running.

And that it is all about the choices we make in every moment of our lives.

And that I had a choice right then that would define what were my priorities.

And then I chose to NOT send that message!

I did get into my running clothes... and I was down in the hotel lobby at 6:00am... and it turned out that there was a group of about 8 runners who gathered there... and we all went out for a great 3.8 mile run!

And I felt great after doing that!

We all have choices. We choose whether to exercise - or not.

P.S. The photo with this post is one I took on a morning run in Toronto during an IETF meeting. My hard-core, ultra-marathon-runner friend Hannes took it easy and joined us slow runners for a nice run along the harbor front... that's him in the orange. :-)