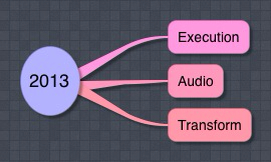 As 2013 draws to an end, I thought it might be appropriate to reflect quickly upon how I did with my "three words" for 2013.

I wrote in part:

this year I want to execute on some of the plans I have had for some time. There are some things I have been thinking about, talking about and even writing about for several years... but have yet to actually start. Not so much in my professional/work life, as I have been all about executing plans there, but rather in my personal life with some of my various side projects.

My record is a bit mixed here. I did dive more deeply into activities with a couple of boards that I'm on. I did start a few of the projects that I'd wanted to... but then others like rebooting VOIPSA are still out there lingering.

Here things have gone quite well! I've actually launched two new podcasts in 2013, experimented with another and have another couple of projects underway:

THE DAN YORK REPORT - What began as purely experimentation with SoundCloud as a platform for audio hosting has turned into a fairly regular podcast, "The Dan York Report", where I am commenting on a wide range of issues. I've recorded 55 episodes so far (and there were some before I formally had the name that could qualify, too), and I have ideas for doing more with this in 2014.

FIR ON TECHNOLOGY - Coming in just under the wire, I launched "FIR On Technology with Dan York" as part of the "For Immediate Release Podcast Network" and published the first full episode today where I interview a friend of mine, Randy Resnick, about how Google+ Hangouts On Air can be used by communicators. It was a great interview and I look forward to doing more of these in 2014. Having been a regular weekly contributor to the main For Immediate Release podcast since 2005, it's fun to expand out into some deeper episodes.

DEPLOY360 ON SOUNDCLOUD - In the "continued experimentation" stage, I started posting audio updates for the Deploy360 Programme on SoundCloud related to our work with IPv6, DNSSEC and other topics. I have some ideas of where I want to take this and am looking forward to it!

Beyond that, I confirmed a couple of people for some future Blue Box Podcast interviews, so there are some good things brewing there. And... well... suffice it to say I have some other ideas in the works. :-)

On this topic I wrote:

In a 2012 leadership workshop for one of the boards I am on, we were asked some questions that could perhaps best be summarized as "how are you using your life to transform the world?" To make it a better place? To bring people together? To strengthen connections and build stronger communities?

Here things have gone well. I've become much more active in a way that I'll write more about tomorrow. Our family is now helping out with some community breakfasts that are a very tangible way to feel that we're helping people in our community. And I've been helping out in some other ways that I'm starting to see are making a difference. And... I love that a large part of what I do for work is based on a clear mission focused on helping people out!

There's much more I'd like to do on this topic (and more on that tomorrow)... but I feel that I did make a solid start on this in 2013.