« My 3 Words for 2012 | Main | Video: Great Introduction to Curling and the Petersham Curling Club »

On To The Next Sledgehammer In The War On Breast Cancer... 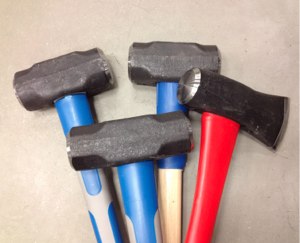 This Monday morning begins, as many have over the past 6 months, at the Dartmouth-Hitchcock Norris Cotton Cancer Center-Kingsbury Pavilion (say that 10 times fast!).

In her ongoing fight against breast cancer, my wife ended four months of chemotherapy with her last treatment back on December 6, 2011. She's thoroughly enjoyed having several weeks without any kind of treatments. Her hair is very slowly starting to re-appear and she's been feeling overall pretty good.

Today begins the next course of treatment. She is starting one year of receiving a drug called Herceptin. Her breast cancer tumor was found to be "HER2/neu positive" and the theory goes that the antibody in this drug will help reduce the chances of recurrence of her cancer. Every three weeks for the next year, she'll be coming in to the cancer center for a couple of hours to get an intravenous infusion.

Herceptin is NOT chemotherapy and the side effects are expected to be minimal. Perhaps just some fatigue for a couple of days. (And, oh, yeah, there are potential cardiac issues that need to be monitored... :-( )

And then assuming all goes well, in 3 weeks she will start five years of a daily pill of Tamoxifen an anti-estrogen hormone treatment that will effectively be trying to starve any remaining cancer cells that need estrogen to grow. All sorts of lovely potential side effects to that including many of the effects of menopause (ex. hot flashes, mood changes), memory loss/fuzziness, and even increased risk of other cancers.

As we've gone through this process, I admit to feeling that as far as we have come with research into breast cancer (and we HAVE come a long way), we still have such a long way to go.

The treatments we have today are like a series of sledgehammers, each trying to do what it can to beat the cancer cells down. Your treatment seems to be:

All the while with the frustrating reality that there might not be ANY cancer cells in your body right now!

Still, though, the treatments seem to be pretty heavy-hitting.

We need the mystical "scanners" of sci-fi shows that can scan a body and confirm the existence of cancer cells to see if any of this is really necessary.

We need even better drug options that can target specific cancer cells more like scalpels instead of sledgehammers.

We need the "nano-machines" of sci-fi that can travel through the blood and find and kill cancer cells.

We need more refined and targeted weapons in this ongoing war on cancer.

And I know we WILL have improved weapons over time...

Meanwhile it's hard to argue with the odds of using the existing treatments. According to the tests on my wife's tumor and based on various studies, there was a 60% chance that she'd be cancer-free after 10 years if she did no further treatments beyond the removal of the tumor.

Add chemotherapy... add Herceptin... add Tamoxifen... add all that together and statistically her chance of being cancer-free after 10 years is now up in the 90s percentage-wise. Maybe 92% or 93%.

Not a hard decision to make, even with all the side effects.

Thanks for sharing this thoughtful post, Dan. I hope all goes well with this next "sledgehammer." What a battle.