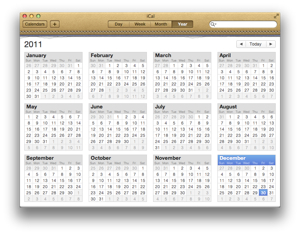 Well, to start with, they - and most all my plans for 2011 - were rather subsumed by an extremely unwelcome fourth word that dominated my year:

Yes, indeed, the defining thread of 2011 has definitely been my wife's diagnosis and subsequent battle with breast cancer. It truly did consume the entire year - she had what was otherwise a routine doctor visit in January that started raising questions... and then her last chemo treatment was in early December.

In between, of course, were horrific months dealing with tests leading to the diagnosis in May, then the operation in July with the long recovery, and then the pathology reports of invasive breast cancer and then the start of chemotherapy in September and all the nastiness that followed.

She's not "done" now... next month she begins five years of a daily hormone therapy called Tamoxifen as well as one year of an every-three-week infusion of a drug called Herceptin.

But in theory we're through the worst of it. We hope.

So looking at 2011 through the cancer-colored lens, just surviving was a beautiful thing... but how did I do with the words that were to guide my activities? Let's see...

My big goal was to increase the amount of actual writing I was doing across my blogs and other sites. Unfortunately I don't have a count for 2010 to know how my writing exactly compares, but I know that I did write more this year. My total was:

Given that I was manually tracking all those entries across several different blogging platforms, it could certainly be off to a certain degree... but it's probably in the general area. Through the first half of the year I was writing more and averaging out about 2 to 3 posts each day. I had aimed to get at least one post out every day of 2011, but that goal feel by the wayside in March and then with all the cancer happenings it never really became a goal again.

Still, I'm pleased with a good body of work out there for 2011. Some of it shorter content... some of it the longer, deeper pieces I love to write. There's still a ton of stories left untold that are sitting in my queue... but I did get a good bit out.

Add to that, I believe, 51 podcast contributions to For Immediate Release. I seem to recall Shel & Neville taking one show off... and I don't think I missed any of the weeks. (And if they didn't take a week off this year, then it was 52 contributions.)

Plus, I published another book, this time with O'Reilly, "Migrating Applications to IPv6". The idea was that this was to be primarily an "ebook" that could then be frequently updated... which, given everything else going on, didn't happen (updates), despite my best of intentions. I'm looking forward to making some updates in 2012.

Where I had hoped to do more in 2011 was with photography and videos. My camera traveled with me a good bit... and I shot lots of photos... I just didn't have a whole lot of the curation/post-production time to then get photos online. 2012! Ditto video.

I made some progress on this... I haven't really publicized it yet, but I've been aggregating my content from across various blogs into a new site at:

It's my attempt to bring together all my content into one central site. There's still much I would like to do with that and it's still not working the way I want, but it's a start.

I never did move my main blogs off of TypePad... perhaps 2012 will be the year I finally make that happen. And I still would like to improve how this site (DanYork.com) presents me...

This is one where I did make serious progress. I had wondered a year ago if running would be something I really continued.

In fact, I ran 5 miles yesterday morning and will probably go for a similar run tomorrow. (Today's a resting day.) Over the course of 2011 I probably ran 400 or 500 miles... hard to know exactly as I'm not tracking all my running (such as on the treadmill).

I also ran in 6 actual races, including my first-ever half-marathon in September.

2011 also marked the time when I brought my running gear with me on every business trip and speaking engagement - and actually RAN!

Wellllll... except for the trip to Orlando where I left my shorts back in New Hampshire! On every other trip (including multiple trips to Orlando), I managed to get out and run at least once if not more. New York... Miami Beach... Toronto... San Francisco... Orlando... Virginia... Austin... I was quite pleased with this, actually, because it's so easy NOT to run while traveling.

So yes, running has become part and parcel of who I am.

Outside of running, there were some other lifestyle changes, too. Some tweaking of what we eat. Trying to do some more of the offline things I enjoy. Adding curling back into my life. Continuing to try to find that balance between the work I love and the family I love... The sudden job change from Voxeo to the Internet Society also brought some lifestyle changes, too.

Outside of the cancer chaos, or perhaps because of the chaos making me think more about priorities, 2011 was definitely one of thinking about - and acting on - lifestyle changes.

It was a pleasure and a treat to follow your various activities throughout the year. In reality, you are something of an inspiration.

All the very best to Lori & yourself (and the wee Yorks, too!) in the coming year and beyond.