« A Monday Morning Reminder About Those Best Laid Plans... | Main | Running Over 400 Miles And Counting... » 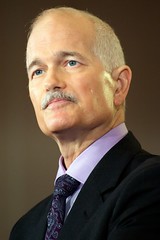 Today is a sad day for our friends up north in Canada - Jack Layton, leader of the National Democratic Party (NDP), passed away this morning at the age of 61 after multiple battles with cancer. The Globe and Mail has a nice tribute to Layton and pretty much every Canadian media outlet is currently writing about his death. For those with no clue who he is, his Wikipedia entry provides a detailed background on his life and work.

I never had the privilege of meeting Jack Layton, but certainly knew of him and read about him / saw him on TV all the time. When we lived in Ottawa, Ontario, from 2000-2005, the NDP was first led by Alexa McDonough with Layton taking over the leadership reins in 2003. Given that as Americans living in Canada we couldn't vote, we didn't have any direct connections to the political activities going on... but as a hardcore political junkie[1], I was fascinated by the Canadian political system and how very different it is from ours.

After moving back to the US in 2005, I've tried to keep up with what is going on north of the border. It's actually quite hard given that our mainstream media here in the US pays almost no attention to what's going on up north. My main news conduit actually has been through the Canadian friends I follow on Twitter and Facebook... their links have kept me up-to-date with what's going on in Canadian politics.

And so it was that I followed the rise of the NDP and their amazing success in the 2011 election with the NDP becoming the official opposition party for the first time in history.

And while it was known for some time that Layton was ill, the finality of his passing certainly has shocked a nation.

Layton's final letter to Canadians, though, is what is also getting a great amount of distribution today. The 2-page letter is available online for all to read and continues the positive tone he always seemed to promote. I was naturally drawn to his language relating to people fighting cancer:

To other Canadians who are on journeys to defeat cancer and to live their lives, I say this: please don’t be discouraged that my own journey hasn’t gone as well as I had hoped. You must not lose your own hope. Treatments and therapies have never been better in the face of this disease. You have every reason to be optimistic, determined, and focused on the future. My only other advice is to cherish every moment with those you love at every stage of your journey, as I have done this summer

The letter goes on to talk of Canadian politics, of the youth of the country, and a great final section to all Canadians.

He ends with what I'm sure will become a widely quoted/tweeted/retweeted/posted text:

R.I.P., Jack Layton. Thank you for all you did for Canada and through that for the larger world.

P.S. And as a long-time sci-fi fan, I admittedly have to respect a politician that can be found (circa 1991) wearing a Star Trek uniform! ;-) 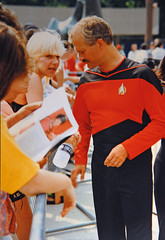 Image credit: mattjiggins on Flickr. It turns out that this was also chosen as the official portrait used on Layton's Wikipedia page.