« Video: Watching the Space Shuttle Atlantis Do A Flip In Space | Main | Of Surviving Breast Cancer... And The Choices Therein » 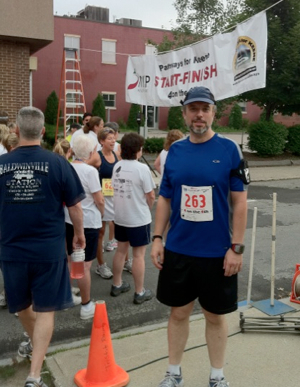 Sure, last November I ran my first "5K", but sadly that turned out to NOT be a 5K (3.1 miles) coming in at only 2.5 miles. So I've been looking forward to running a race that was formally over the 5K mark.

On July 4th, 2011, there were 550+ people gathered in the "Railroad Square" area of downtown Keene. The race had both walkers and runners... and per the results at CoolRunning.com there were apparently 391 runners.

I was pleased with the results given that I typically run about 10 minutes/mile, so the "race pressure" obviously pushed me to go a bit faster than normal.

The CoolRunning stats also show that I came in 28th out of 38 in my age bracket (40s). Given some of the outstanding runners in the race, I'm fine with that ranking. Consider that George Adams, the 1st runner in that age bracket - and 8th overall - ran the 4 miles in 20:44 for a pace of 5:14/mile!

It was also truly amazing to see the pack of mostly 20-something guys that led the race... they were warming up before the race began and you could see they were going to be fast. The race itself was a simple loop down and back so you did wind up passing the people coming back in the other direction. When the first guy passed me when I'd only run about 1.75 miles, I knew he was going fast... still... seeing that people came in under 5 minutes a mile was quite impressive.

All in all it was fun to run and I'm looking forward to my next race, the NH/VT Susan G. Komen for the Cure race over in Manchester, VT, this Saturday...

Fun stuff considering that a year ago I wasn't really even running!