One Year Of Exercise: 50+ Pounds Lost and Hundreds of Miles Run 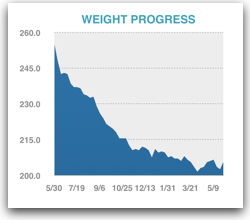 One year ago today, May 30, 2010, my wife and I began a concerted effort to introduce physical exercise into our daily routines. My exercise at the time was just walking because I quite simply couldn't run even up to the end of my street - and even walking too far was a stretch. Being who I am, I opened a spreadsheet and recorded my weight at the time: 255 pounds.

Fast-forward one year to today and this morning I ran a 7-mile run with an average pace around 10 minutes/mile.

Still pretty unbelievable to me.

Along the way, I dropped 50+ pounds... my pants size is now 6 inches smaller and I've dropped in T-shirt size not just from an XL to a Large... but even down into a Medium for many shirts.[1]

That, too, I still find hard to believe.

As I outlined at some length in a post back in November 2010, Living Proof that 40-year-old Fat Men Can Get Up and Run!, I didn't start out on this journey to become a runner. That was probably the last thing on my mind. But it just kind of happened along the way...

After that post in mid-November, my wife and I continued running outside into December, pushing each other until we were up over 6 miles (with her, again, raising the bar on that one). We then bought a treadmill and both worked out religiously through the long winter. I started back outside in the cold of March, averaging 3-4 miles until May, when I started ratcheting up the mileage to where a 5-7 mile run is now my new "normal". (Alas, my wife has been dealing with medical issues this Spring that have kept her away from running until just last week.) 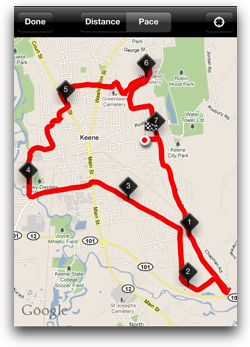 I've continued to be very focused on running every other day with taking an extra day off on the weekends. Admittedly I haven't been as good lately about walking on the off days, but I'm trying to change that. In fact, last week I started introducing some bicycling as the off-day activity.

Along the way, we invested in Garmin GPS watches ... and I started using iPhone apps to track my running as well. I don't have a total count of the miles I've run and walked... but the two iPhone apps I've used (Nike+GPS and Runkeeper) together show me up around close to 400 miles.

The funny - or sick - thing is that I'm actually starting to enjoy the running.

What's even more amusing - or more sick, depending upon your perspective - is that I can actually see how people run even longer. With the distance I'm running now I've already passed a "10K"... the next target would be a half-marathon at 13.1 miles... and for the first time that doesn't seem completely unattainable. (The real challenge I have is finding the time for longer runs.)

We'll see where I go next... today I'm celebrating one year of exercise ... and of burning exercise into my daily routine. (And yes, I'll probably go eat a chocolate chip cookie to celebrate... I think I've earned it! ;-) )

[1] I should note that running was NOT the only factor in my weight loss. I also changed my eating in one major way: I stopped taking second helpings. I simply limited myself to whatever I put on my plate the first time.

P.S. And yes, the effort at losing weight will continue... as the chart shows, I've been flirting with the 200 pound milestone for a while now, and I'm determined to break that mark... which would be the first time since probably 1990 or 1991...

Good on yer, Dan! No running for me, but the only barriers between me and regular yoga are mental.

Congrats, Dan. By the way, if you've run 400 miles, it's probably time for new shoes.

Wow, you managed to do that quickly. Congratulations. I've been doing 30 minutes of hard cardio (85% MHR) three to four times a week. The weight is coming off, but nothing like that (I've lost about 5 lbs in 4 months; If I can keep it up, I'll reach my goal sometime in 2014).

I presume you're using a Withings scale to track the weight on a day-to-day basis?

Also: catch up with me in Quebec City; I've been playing around with a heart monitor app on the iPod, and have found it quite useful as a motivator...

Congratulations! losing that much weight is very outstanding.. truly inspiring!