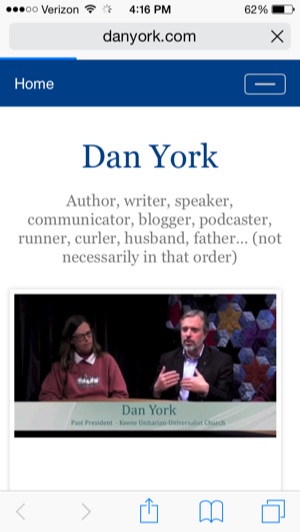 Today I made on change on this "DanYork.com" site to move it to a new theme that uses "responsive design" so that it will look good on a mobile device as well on a large screen. I've been wanting to do this for quite some time because any of a zillion reports out there will tell you that an increasing majority of users are viewing websites on their mobile devices. I can just see that in my own behavior where I use my iPhone or iPad for viewing so many sites.

The challenge I have is that this site, and my other major personal blog sites, are all still hosted on TypePad, one of the early blog hosting providers where I started writing back in 2005 or so. Some year I'd love to consolidate them onto one of the other hosted sites where I run WordPress... but the amount of work to do so is quite substantial given the hundreds upon hundreds of posts between my various sites. Some day...

Meanwhile, I figured out enough about TypePad's one responsive design theme to be able to move this site over. At some point over my holiday vacation I'd like to move these two over to a responsive theme:

They are where the bulk of my personal writing occurs. The challenge with any move to a new theme on TypePad is that you need to rebuild the menus, sidebars, etc., so it does take a bit of time.

I also want to move my writing aggregation site to a responsive theme:

That site is hosted on WordPress and so there are many options... I just have to find one that I like and spend the time configuring it.

Most of my other WordPress-hosted sites already are responsive, including:

Out of my various websites where I write that will really just leave CircleID, where I have no control over the formatting, and my 7 Deadliest UC Attacks site that is also still hosted by TypePad. If I have the time, I'll probably just move that one during the migration of my DisTel and DisCon sites.

And then, of course, there is my Deploy360 site at work... which is a MUCH bigger challenge that will be dealt with sometime in 2015...

The end goal will be that people will be able to read my writing with ease on whatever platform they use - mobile phone, tablet, desktop... or anything else.

Welcome to DanYork.com, the home of Dan York on the web. The reality is that I don't write often here on this specific site (danyork.com) as my writing is usually found on my various focused sites, particularly these five:

You can visit danyork.me for a stream of all my latest writing across all my sites.

For an explanation of those sites and the full list of sites to which I contribute, please visit my blogs and podcasts pages. The best way to track what I am writing or doing is probably to follow me on Twitter where I am @danyork and tweet frequently. Feel free to browse around this site since you are here... look at my photos... scan my presentations... check out my books... sign up for my newsletter... or just generally learn more about who I am. Thanks for stopping by!

Welcome to the new DanYork.com!

Welcome to the new "DanYork.com"!  Since 2001 I've been redirecting this domain to a page about me on my Lodestar2.com site but in 2010 I decided it really was time to do a bit more with a portal "about me" on the web, particularly with my new book coming out in April 2010. This site is now hosted on TypePad, home for many years for my Disruptive Telephony and Disruptive Conversations blogs, as well as a number of other sites I've maintained.

This site is still evolving... I need to move a bit more of the content over from the old site... and I have some design tweaks to make to it... but here it is!  Comments, suggestions, feedback, typos... all are welcome - just send me an email or leave a comment here.

I am not entirely sure exactly what content I will be posting directly on the "blog" portion of this site. I expect most of my writing will continue to be on my various blogs, but I expect from time to time I'll provide updates here.

Thanks for visiting... and you may want to read the "About" page to understand who I am.