Walking In Red Square - Reflections Of A Child Of The 1970s 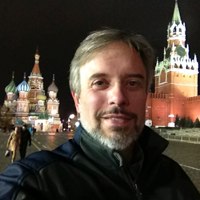 I was born in the late 1960's and grew up in the U.S. in the 70's and 80's when the Russians were the enemy. When the Soviet Union was the evil empire bent on the destruction of freedom, democracy and everything we held dear. When calling someone a "Russki" was an insult and when the news media routinely showed images of the Soviet military parades in Red Square. When we were sure that the Kremlin was sending spies into our country to steal all our secrets and would do whatever it could to destroy our lifestyle.

And when the doctrine of "mutually assured destruction" meant that we didn't practice hiding under desks, as our parents might have, because we all knew that if the Soviets launched their missiles, we'd launch ours and the world as we knew it would end. (How many movies were made on this theme in the early 80s?)

Of course, the only "Russians" we really knew of were the evil villians of the James Bond movies and countless spy thrillers... or the state-sponsored "super athletes" that we saw in the Olympic Games and who we understood to be intent on showing how Communism was so much better and would triumph over Capitalism.

In many ways it was a much simpler world-view.

The Russians were the enemy. 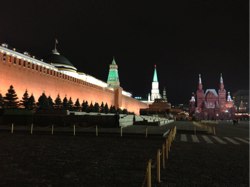 I thought of all this tonight as I strolled along through Red Square taking photos. Drinking in the magnificent beauty of St. Basil's Cathedral. Taking photos of the walls of the Kremlin. Stopping to look at Lenin's Tomb.

How could I ever have even remotely imagined that I would someday be here?

Granted, we were also the generation that watched as glasnost and perestroika took hold in the Soviet Union under the reins of Mikhail Gorbachev. We saw the Berlin Wall fall. We saw the opposition under Boris Yeltsin. We saw the Soviet Union dissolve and simply cease... to... exist. We saw multiple nations and economies emerge. 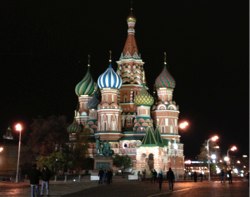 We watched as the story we'd been telling and retelling for so long was shattered into a million shards... to be reborn anew into new stories of new nations... of a new worldview... of new threats... of new powers.

It's been 20 years now since Russia was reborn, and no sooner do you arrive than you immediately understand that this is a vibrant market economy full of energy and full of passion. I've had the privilege of spending the last two days in a room full of technologists and business people, of marketers and politicians ... all focused on how to make the Internet more capable within Russia and the surrounding countries. To make the Internet faster, better, safer, more secure, more powerful... and more open. It's been an outstanding event where I've both learned a great deal and met some truly remarkable people.

Yet still... I am a product of my childhood.

As I went for a morning run looping down through Red Square this morning... and then walked back there tonight... I could not help but be utterly amazed by how our world has changed. How different it is today from those decades ago.

Alas, I will not get to explore more. This was my typical business trip where I took a taxi from the airport to the hotel, spent two days inside a hotel and now will leave in a few hours to go back to the airport to fly home. My morning run and evening walk were the only times I got to see anything beyond the hotel walls.

But I have learned much from this visit - and would welcome the opportunity to return.

Perhaps there was no greater sign of the change in Russia... at least for those of us grew up in the 70's and 80's and can appreciate the exquisite irony... than this, an advertisement for the latest James Bond film, prominently displayed on the sidewalk in Moscow: 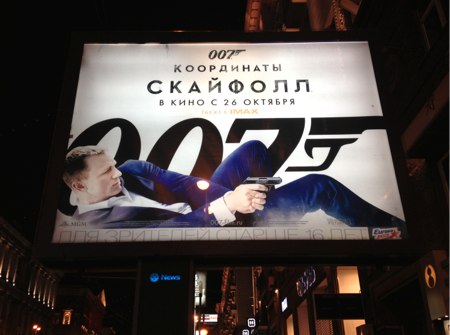 Our world has indeed changed. And this is a good thing. 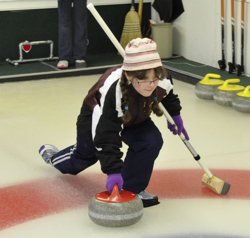 Yea! This Saturday is the first day of the youth curling league at the Petersham Curling Club down in Petersham, Massachusetts (about 45 minutes south of where I live in Keene, NH).

It will also be the start of my second year coaching as I'm helping out with the "Little Rockers" who are between the ages of 7 and 11. (Including my now 10-year-old daughter, pictured in the photo accompanying this article.) I helped out last year and didn't realize how much fun it would be to do! On a certain level it shouldn't have been a surprise given my love of teaching, but I didn't expect how much I would enjoy it.

I'm looking forward to getting back on the ice this weekend and seeing what we can do this year with the kids.

We'll probably be having an Open House soon where people can come and check it out... stay tuned for more info!