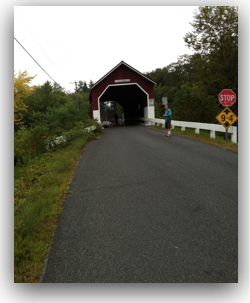 I'm going to do it again... only this time my goal is to run the entire race!

It was a great race and I really enjoyed running it.  It was fun to put the "13.1" sticker on the back of my car when it was all over.

However, I had a severe problem with my running pace that I hope to change this time around. 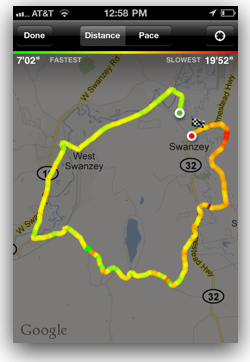 If you look at the image to the left with the map produced by my Nike+ iPhone app, you can see the problem. It's showing the pace of my run and you can see from the color legend at the top the speed at which I was traveling going from fastest (green) to slowest (red).

In fact, I walked through the water station at mile 12 as I had been walking through all the aid stations... but then I just kept on walking!

After what I remember was close to a half-mile, I said to myself that I "just" had a half-mile or so left and that I really should run that final bit. So I picked up my feet and struggled to the end.

My issue was that at the very beginning I had positioned myself in the middle of the pack of runners and so when they all took off... I took off with them all! Running very fast! My "normal" pace is about 10 minutes/mile and so dropping it to a 7 minute mile was a definite - and unsustainable - speed increase.

Added to the situation was that for a short bit near the beginning you run over a trail by some power lines that is quite narrow with little room to pass. So once you enter that section it is really a "channel" through which everyone must go and it's hard not to run fast with people right behind you.

This year my goal is to do the "tortoise approach" and run slower and steadier for the whole race. If I can run it all at around 10 minutes / mile that would be an excellent outcome. If I could even do it a bit faster in between 9 and 10 mins/mile that would be even better. Last year the official results had my overall time as 11:13/mile and I would like to do better than that.

My strategy, such that it is, will be to start out at the back of the pack so that I don't get sucked into the adrenaline-fueled initial surge. I also have a friend of mine who is running with me... and said he'll make sure I run the whole thing! ;-)

I've also had an entire year more of running, along with a set of other races (although none this long).

Regardless, I'm looking forward to the race!

P.S. If you are in the area (or want to travel here), information about the race is online. Online registration is closed but I believe you can register on the morning of the race.