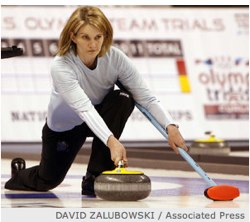 For those folks lucky enough to live in the Philadelphia area, or who can travel there, this weekend begins eight days of the US national curling championships! The best men's and women's teams will be in Philly vying for their chance to qualify in a slot for the 2012 World Championships and the 2014 U.S. Olympic Trials.

Expect to see some outstanding curling happening this week!

More on the story:

A local Philadelphia country music station also seems to have helped produce a video with interviews and shots of what is going on there:

Looks like fun, and if you are in the Philadelphia area, this is your chance to get to see some of the best curlers in the nation!

Can Komen Ever Regain Our Trust?

There is perhaps no more powerful statement on the betrayal felt by many women with regard to the Susan G. Komen / Planned Parenthood debacle than this one simple video from "Linda":

The pain of her treatment is that felt by at least 1 in 8 women during their lifetime. Her scars on her chest are like those of my wife and so many other women for whom the "cure" involved radical changes to their bodies.

Her sense of betrayal is that of so many women.

It's not that the Susan G. Komen For The Cure organization can't choose who it wants to fund based on ideological/political reasons. It can. That is a perfectly valid way to run an organization and to choose who to fund.

But that's not what people signed up for.

It's not what they donated money for.

It's not what they ran or walked races for.

They donated/ran/walked/volunteered... FOR THE CURE.

There was never an asterisk on the "cure".

It was never "for the cure as long as said cure meets our ideological/political guidelines".

It was for the cure. Period. Full stop.

It was for the cure. Period. Full stop.

But then Komen completely mishandled communicating the Planned Parenthood issue and made it far worse with a disastrous interview with Andrea Mitchell that raised many more questions than it answered.

Sure, the Komen Board eventually reversed its position, which was pretty much guaranteed to satisfy almost no one. And certainly many people may be pleased at the departure of Komen VP Karen Handel.

But Komen has a far larger problem.

The proverbial curtain has been pulled back and Komen supporters are learning more about the organization that they have supported.

They are learning of the political activities of the organization's leaders. They are learning about other instances, such as the ending of funding to organizations that supported embryonic stem cell research, even though no Komen funding apparently went directly to such research and the Komen organization had in fact trumpeted the potential of such research back in 2006. A statement about this topic on November 30, 2011, was apparently posted to the Komen website but subsequently removed.

It was for the cure. Period. Full stop. Never with an asterisk.

And more questions are being raised about Komen's methods, their choices, their staffing... and, well, pretty much everything about the organization.

And while there can be no doubt that the Komen organization has done a tremendous amount of work for breast cancer education and research (just look at the last few pages of their 2010 Form 990 to see all the many grants they've given), the question many of us (including my wife and I, who have been definite Komen supporters during my wife's ongoing fight with breast cancer) are now asking is:

Are they the right organization to whom to donate?

Can we trust Komen's leaders to truly put the "cure" above their personal politics?

Are there better organizations where we should focus our time, dollars and energy? Can our dollars be more effective going to organizations directly involved with research?

How do we find a cure for breast cancer? Or at least better tools than the sledgehammers we have today?

Komen's now lost the trust of the Linda's of the world who believed so strongly in the mission and purpose of the organization. Can they regain that trust? Maybe. Maybe not.

It was for the cure. Period. Full stop. Never with an asterisk.