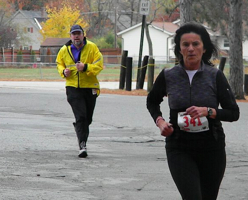 It's Spring here in New England... or at least, it is today. Tomorrow the forecast calls for a whopping big snowstorm, but even if it blanket us in white, it won't last long.

With the warmer weather, my thinking is naturally turning to running in some races in 2011... well, "naturally" perhaps isn't the right word. This concept of being a "runner" is still something I'm trying to wrap my brain around. But I definitely am one at this point... and what's more bizarre is that I'm actually enjoying it!

With that "enjoyment", I'm starting to look at what races I'll enter... sticking to 5Ks to start... maybe working up to a 10K. I don't know that I'll get beyond that this year, but we'll see.

I'd like to run the Cheshire Medical 5K here in Keene, NH, on April 9th, but alas we have a houseful of guests that day and some other events. I will run on April 10th as part of the Automattic WorldWide WordPress 5K... but that's me running by myself here locally and then sharing that with the world. I know there's a 4 mile race on July 4th here in Keene that I'll do. Beyond that, I'm starting to look through CoolRunning.com to find out where other local races are happening.

I'm looking forward to running some races this year... and odds are that I'll turn this personal blog into a bit of a "running blog" over the next few months... one of my goals for this year was to run some races... we'll see how I do.

What about you? Are you running in any races this year? 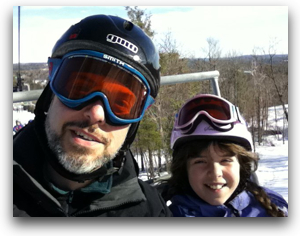 With temperatures up in the mid-40s Fahrenheit and never going below freezing at night, it's no surprise that the local ski areas here in southwest New Hampshire are all ending their seasons. As we drove by a local area just outside of Keene yesterday we could see that while people were skiing there was mud on some of the trails... and a ski area up near Concord, NH, we passed today seemed to be closed up already.

Sure, the big mountains up north will keep going for a number of weeks more, but our weekends are getting all crazy... so for us... well, the season's basically done. One more chance, maybe... but that's probably it, if it happens.

It's been a truly fantastic year for us for skiing. Our oldest daughter is 8 this year and she took lessons at our local "Granite Gorge" on Saturday mornings. The cool part for me was that while she was off with an instructor for an hour lesson, I got to ski alone for that time. When her lesson was done, the two of us then got to ski for another hour together.

Repeat that for almost 6 weeks in a row and you have a darn good winter! (One week we did not do it was when there was too much wind and the lift was closed.)

It was an interesting winter for me personally because it was a chance for me to really work on my own parallel skiing. You see, the last time I skied a large amount was: 1) about 18 years ago; and 2) entirely on telemark skis.

I was a "tele" skier all through college during the mid-80s and on up into the '90s when I stopped skiing as much. Sure, I had learned to do "regular" downhill skiing, but had moved rapidly into telemark. When our daughter was 3, we were living in Burlington, VT, where skiing is a big part of life, and so I took her to a local hill, donned parallel skis myself, and helped her learn to ski. As any parent who has taught their child to ski can attest, those first few years are... um... "challenging"... and you yourself don't get much in the way of skiing. Two years ago our daughter had classes on her own, but on a weekday when I wasn't able to ski, and we weren't really able to ski. Last year we had the combination of not-terribly-great snow ... and a newborn daughter... so we only went maybe once or twice.

This year, though, was a completely different year. Outstanding snow conditions... and Saturday classes... together made for a fantastic year... and a great father/daughter experience.

She pushed me, too. While I'd skied all sorts of terrain on my tele boards about 20 years ago, I'd stuck mostly to the beginner or intermediate slopes on the parallel skis. As the season went on, though, she went on the more advanced terrain in her classes and by the end of the season I was right there skiing all the black diamond trails with her. :-)

We ended on a truly awesome note, too... our last day of skiing was on a beautiful morning before the warming spell at Crotched Mountain Resort where the trails were wide and the snow was outstanding. Skied almost every trail on the mountain and had a wonderful day.

Now, as we put the skis away and look forward to getting into the warm weather activities, all I can say is that it was a great season... and I'm looking forward to next year!