« Next "Crow's Nest" email newsletter going out this week - are you subscribed? | Main | Living Proof that 40-year-old Fat Men Can Get Up and Run! »

The Chariot Jogging Stroller That Saved My Daughter's Life 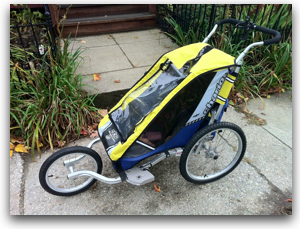 This Wednesday, October 6, started out as a regular day for my wife. As she has hundreds of times before, she went for a morning walk on the streets of Keene, NH. Since the forecast called for rain, she decided not to pull our 17-month-old daughter around in her plastic red wagon but instead push her in our Chariot Cougar jogging stroller.

She could not have known how right that decision was.

Toward the end of her walk, with our daughter napping in the stroller, my wife started to cross an intersection in a crosswalk. She saw a car coming from the opposite direction and expected that, as usual, it would stop at the stop sign and wait for her to finish crossing. To her amazement the car did not come to a complete stop but rather slowed down and then turned left across the intersection and accelerated directly into my wife and our daughter!

The driver struck my wife in the legs and she sailed across the hood of the car and landed on the street. The car struck the wheel of the stroller and sent it flipping over three times. A neighbor came running out and dialed 911 when she saw the stroller flipping through the air.

Miraculously, our daughter was unhurt!

Both were checked at the scene by the ambulance crew and later at a doctor's office. My wife had x-rays and did not break anything - but is quite sore and stiff and will be for days. Amazingly, our daughter seems perfectly fine.

All we can do now is be incredibly thankful - and praise the construction of the Chariot stroller. Being designed to be a bike trailer, it has a rigid aluminum frame all around the seating area and solid straps for the passenger. We've had this particular Chariot for about 8 years now. We bought it up in Ottawa for our first daughter and have used it as a bike trailer, jogger and even skied with it a few times (there's a conversion kit).

It is not cheap. But it's been solid, reliable, very easy to push, and in this case... live-saving.

The wheel on this one is broken and we're not sure whether to trust a stroller that's been in an accident, so we've already ordered a new one. I think it's safe to say we will only be using that one for walks around the area.

Dan, I am in tears reading this. How horrifying for your family. Thank goodness there is a happy ending to this story! (Was the driver charged?)

Wow. Quite a day your family had. Good to hear they're all fine and practically unhurt.

Great to read; our stroller has been involved in an accident too, just last week (Cougar 2)in Copenhagen, Denmark. Almost the same situation as yours, but with a less strong impact. Luckily the stroller did not flip over and the children (3 years and 10 months) were only scared, not injured.

All wheels are broken (off), the cage construction is bend and all screws are loose. Time for a new one. Indeed, it is expensive, but I have strong doubts if another brand would have protected my children as much as the Chariot did!